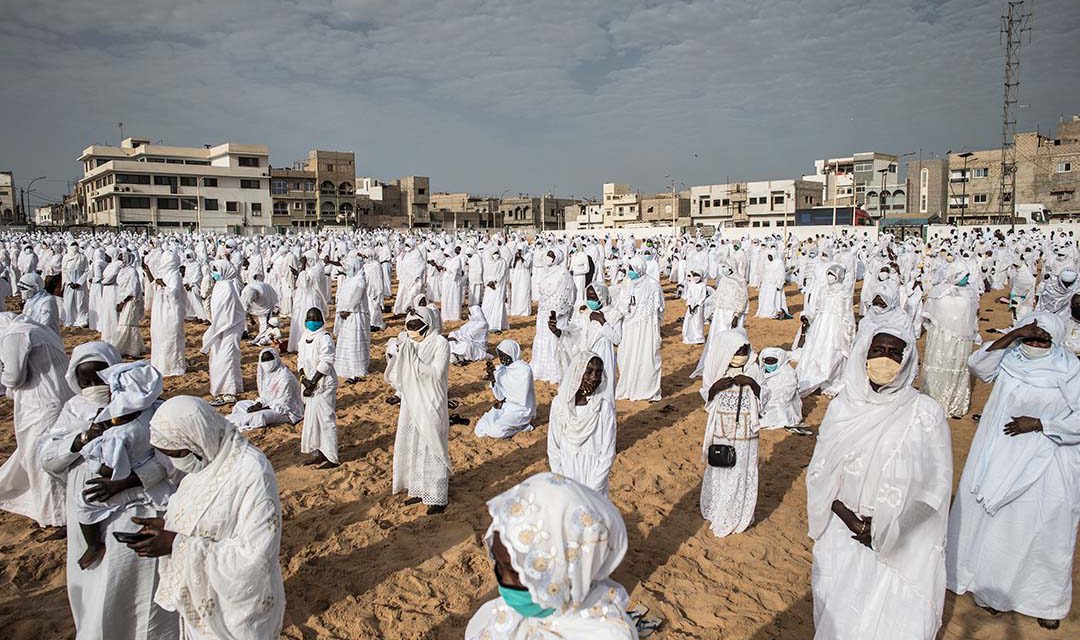 Followers in front of the Yoff Layene Mosque during the Islamic festivity of Korite marking the end of the Muslim holy month of Ramadan in Dakar, Senegal, May 2020 Photo: John Wessels/AFP

Africa has so far seen controversial and even dramatic policy measures in response to the coronavirus crisis. From Tanzania withholding infection and fatality data as the government pushed conspiracy theories, to Egypt’s clampdown on citizens disagreeing with the government’s handling of the pandemic, to Madagascar’s promotion of a botanical brew as an antidote without following the standard scientific approval steps, the continent has had its share of the blunders that have helped exacerbate the crisis globally. Few, however, have seemed as ironic as Nigeria’s fiscal response at the peak of the crisis.

As the virus ravaged nations, overwhelmed health systems and devastated markets, the continent’s biggest economy announced a steep health budget cut in June, citing a decline in crude oil revenues. The government sliced basic healthcare funding by nearly half, reducing it to 25.5 billion naira ($71 million). The move angered a public already enraged by the government’s earlier plan to refurbish its parliament building with 37 billion naira. Before the pandemic, Nigeria’s entire health sector received 8% of the country’s total budget this year. That figure fell to 6% after the cut.

“This shows what is wrong with our country: poor prioritisation of projects,” Sam Ohuabunwa, the president of the Pharmaceutical Society of Nigeria, told the popular Lagos-based daily, Punch, at the time. “How come the renovation of the National Assembly is taking priority over healthcare and education? It does not make sense to me.” But Nigeria’s typically measly health spending this year is not unique. Kenya proposed to spend only 4% of its total budget on health this year before the pandemic started, and South Africa allotted 11.8% of its budget to the sector.

Besides being relatively low, all three budgets – and many others – share a thing in common: they fall short of a benchmark voluntarily set by African leaders in the Abuja Declaration in 2001, to yearly allocate at least 15% percent of their countries’ budgets to health expenditure. Nearly 20 years after the Abuja Declaration, named after the Nigerian capital where it was signed, many African countries have largely failed to honour it. Their health systems are without needed resources to build and equip hospitals, train and pay health workers and implement health insurance for citizens. The World Health Organization says more than 37% of all of Africa’s health spending comes from out-of-pocket payments.

Now, the COVID-19 pandemic, more than any other crisis in recent history, has shown how grim the situation is across the region. In April, the WHO said 43 African countries had just 2,000 ventilators and 5,000 intensive care beds, while 10 countries had no ventilators at all. Making up just 16% of the global population, Africa bears 23% of the world’s disease burden, yet accounts for just 1% of the total global health expenditure in 2015, according to United Nations and WHO figures. “The COVID-19 crisis and its impact on health and other social policy sectors such as education as well as the economy, has brought to the fore the importance of strong healthcare systems to pre-empt and deal with such global threats,” Kalipso Chalkidou, professor of practice in Global Health, Imperial College London, told Africa in Fact.

The Abuja Declaration was agreed to address the persistent funding problem that had seen health per capita public spending in Africa at a meagre US$70 in the early 2000s. A decade after the declaration, 27 nations had increased the proportion of their health expenditure, according to a 2011 report by the WHO. By 2013, only three countries – Rwanda, Botswana and Zambia – had achieved the 15% mark. By 2014, while the average per capita health spending rose to US$160, more countries (19) were spending less on health as a percentage of their budgets, a follow-up report by the WHO in 2016 stated.

According to the report, countries whose health spending fell lower than the pre-2000s figures included Chad, Mozambique, Tanzania, São Tomé and Príncipe, Sierra Leone, Zambia, Rwanda, Senegal, Equatorial Guinea, Zimbabwe, Cabo Verde, Cameroon, Comoros, Benin, Mauritania, Togo, Botswana, Niger and Central Africa Republic. Remarkably, the report found that a country’s wealth did not exactly determine its allocation share to healthcare. For example, while countries with high per capita income (over $10,000) such as Algeria, Botswana, Equatorial Guinea, Gabon, Mauritius, Seychelles and South Africa did not spend as much on health, those with relatively lower per capita like Ethiopia, Gambia and Malawi, surpassed the 15% target.

“Despite increases in fiscal capacity, spending on health has been deprioritised as governments strive to meet other obligations,” the report stated. “In low income settings, the deprioritisation of health in public expenditure tends to be associated with country-level fragility and political instability, poor governance and corruption.” It also found that most countries prioritised high-end care, that is secondary and tertiary levels referral hospitals that treat mostly the middle and upper classes, and committed, on average, less than 40% of health expenditure to primary care that caters for the majority of the continent’s poorest population.

In some countries, the allotted funds were never fully spent due mainly to unpredictable allocations, mismatch between policy and budget allocations, inappropriate budget structures, and under-performing execution systems. As much as 60% of the money remained unspent in Democratic Republic of Congo, for instance. The Nigeria case shows that years after the WHO’s latest report, not much has changed across the continent. Nigeria’s highest-ever public budget share for its health was 7%. A more recent assessment of specific countries in 2019 by a non-governmental group, Africa Health Budget Network, based in Abuja, found that only Burkina Faso (11.03%), Ethiopia (8.1%), Malawi (9.83%), Mozambique (8.35%), Rwanda (8.88%) and Tanzania (9.52%) made some level of progress in trying to meet the 2001 target.

Among all the countries reviewed, only Madagascar reached the 15% goal. “In the face of the current COVID-19 pandemic, health expenditure has nosedived, with many African countries relying on regional and international loans, grants, and donations,” Aminu Garba, the coordinator of the group, told Africa in Fact. By 18 August, Africa had recorded over 1.1 million cases of the coronavirus and 26,346 deaths. Activists and health experts are hoping the COVID-19 experience will provide a new window for Africa’s policymakers to take the decisive step of committing more resources to healthcare.

Chalkidou, who is also the director of Global Health Policy and senior fellow at the Center for Global Development, said with debt at unsustainable levels, they could do so by leveraging innovative and radical ways of generating revenue to not only protect but also to boost spending on health. Also, wealthier nations, although even worse hit by the recession, should do their bit by boosting rather than cutting development aid, she said.

“Radical tax reform, including revisiting fuel subsidies and introducing excise, including tobacco and alcohol taxes, smarter spending, leveraging pooled public procurement to improve procurement of pharmaceuticals where billions are wasted every year in a fragmented and inefficient fashion, and actively exploring underused tools such as debt swaps, must be at the forefront of the policy response,” she said. Response measures should also include governments cutting unnecessary overhead and recurrent expenditures and ensuring judicious utilisation of all loans, grants and donations, Garba added.