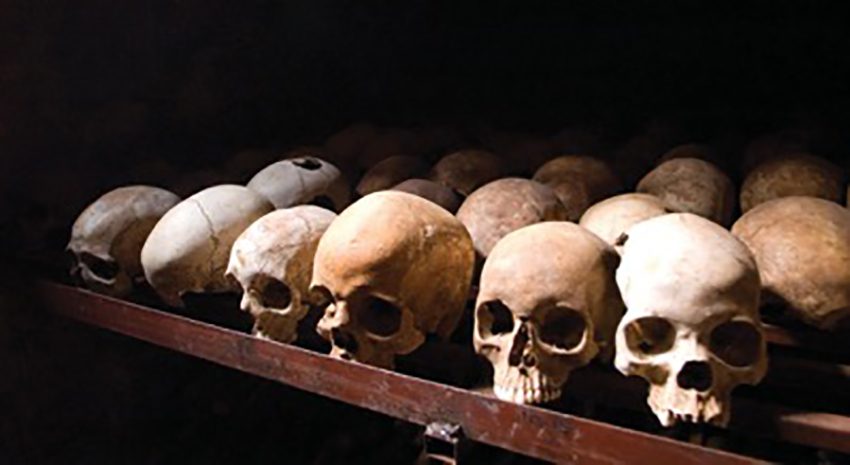 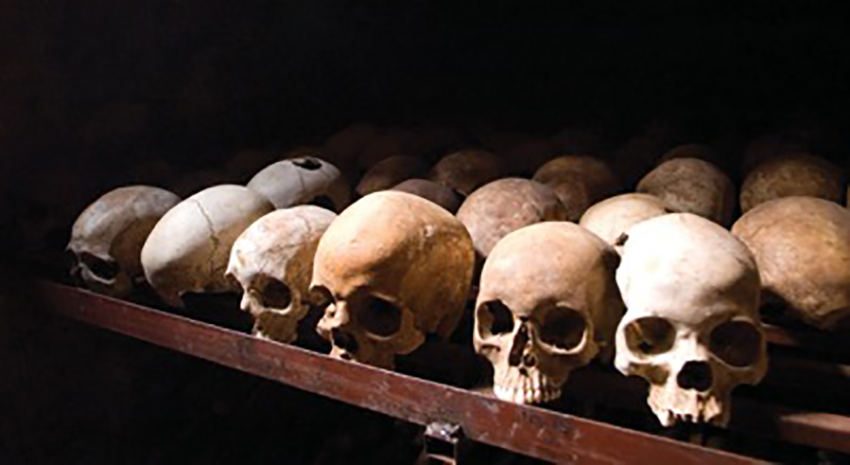 1994 a new government came to power in Rwanda after the country had seen a genocide that claimed the lives of about three quarters of the Tutsi ethnic minority.

The Rwanda Patriotic Front (RPF) immediately embarked on a policy of de-ethnicisation and national reconciliation. The RPF is overwhelmingly composed of Tutsis, and it was facing the task of governing a country that included a large majority of ethnic Hutus, estimated at between 85 and 90 percent of the population.

According to the RPF, pre-colonial Rwanda was a harmonious society in which Hutu, Tutsi and Twa were not ethnic labels but categories referring to wealth and status. These groups shared the same history, culture, religion and space. Intermarriage was frequent, and social mobility was real. Hutu could become Tutsi and the other way around, by becoming richer or poorer, particularly as measured by the possession of cattle. While there was conflict, it was never ethnic in nature. The kings belonged to Tutsi lineages, but they lost this ethnic label upon assuming office as they were the benevolent guardians of all Rwandans’ wellbeing.

According to this version of history, Rwanda’s unity was destroyed by the Belgian administration and the Catholic Church. Economic and political independence were lost, foreign education and religion undercut Rwandan culture, a divide-and-rule policy set Hutu and Tutsi against each other, and political ethnicity emerged. After independence, the regimes of the first and second republics continued the segregation legacy of the colonial masters, and the problems were compounded.

After a lost century, Rwanda’s history resumed in 1994 when the RPF took power after defeating the genocidal regime. It liberated the country from dictatorial leadership, and built a nation based on law, democracy, peace, security, justice and development. The narrative is promoted in the national and international media, at conferences inside the country and abroad, and in the speeches of national and local authorities. All Rwandans know it and can recite it flawlessly.

However,  the  RPF’s historical narrative involves “a whole set of false propositions and assertions”, according to a leading  historian of Rwanda, Jan Vansina. “The linguistic and cultural unity of the country today did not exist in the 17th century and Rwanda is not a  “natural” nation.

Rwanda really became a nation in the 20th century … “Formerly, neither abundance nor order flourished in the country and it is false to think that everyone was happy with their station in life and all lived under the shepherd’s staff of wise kings,” he writes. The RPF’s narrative of “erroneous propositions” aims at “the projection of a nostalgic utopia into the past, a past that contrasts with a painful present”.

The RPF has established a monopoly over the country’s history, to the extent that alternative histories cannot be articulated, at least not in the public arena. Andrea Purdeková argues that, under the RPF, history “is open to replication but closed to debate”. Debate about the past is actively policed by the regime.

Indeed, a Rwandan History Project at the University of California, Berkeley initiated in 2001 encountered RPF hostility when it attempted to develop a historical curriculum that included alternative narratives.

The  government’s  attempt to control history conflicts with one of its own goals for education reform—to embrace modern, democratic teaching methods that include critical thinking  and debate. Moreover, most Rwandans do not share the government’s view of history. “Competing singular versions of history — the RPF meta-narrative and the counter-narrative — effectively continue the conflict through discursive means,” Lindsay McLean Hilker writes. Relegating this counter-narrative to the private domain may render it invisible but does not make it disappear.

The RPF apparently believes that the Rwandan genocide gave it the right to remake Rwanda, including its history. Indeed, the regime considers knowledge production to be an aspect of its (international) sovereignty.

It protects its version against challenges with laws on divisionism and genocide ideology, by judicial prosecution, and by political repression.

A document published in 1999 by the Office of the President states  that “[b]efore the Europeans’ arrival, Rwandans were  understanding  each other, the country was characterised by unity” and that “the unity of Rwandans is a foundation on which a new Rwanda will be built”.

However, it continues, saying the aim of restoring the unity that existed before colonial days has not yet been achieved. Because of this, a national body— the National Unity and Reconciliation Commission—has been established “to educate, sensitise and mobilise the population in areas of national unity and reconciliation” and “to denounce and fight actions, publications, and utterances that promote any kind of division and discrimination, intolerance and xenophobia”, among other things.

The RPF’s strategy is two-pronged: on the one hand, educating people and disseminating information; on the  other,  monitoring,  “fighting”  and repressing acts and discourses  opposed  to  unity.

The  former  can be seen at work, for example, in the  government’s  neo-traditional  gacaca courts and ingando re-education camps. The latter is evident in legislation on “divisionism” or “sectarianism” and on “genocide ideology”, and prosecutions under these laws. The government’s perspective on reconciliation is based on the idea that Rwandans possess an innate sense of social harmony, undermined by previous colonial and post-colonial regimes, which can be recovered, as Phil Clark points out in a 2014 study of reconciliation in Rwanda.

More importantly, reconciliation is a “national” process occurring between groups in society, never described as “Tutsi and Hutu” but as “victims and suspects” or “survivors and perpetrators”.

With the right policies, harmony can be rapidly restored. Education is one way of achieving this. Schools are tasked with the “detoxification” of youth, and with the restoration of “recently eroded Rwandan values”. Education in schools and elsewhere is considered a “structure to neutralise the ideology of genocide”, Elizabeth King writes in a study of education and conflict in Rwanda.

The preamble to the 2003 constitution states that the people of Rwanda are “[r]esolved to fight the ideology of genocide and all its manifestations and to eradicate ethnic, regional and any other form of divisions”.

The RPF’s de- ethnicisation project is top-down, and based on the belief that, as ethnic divisions can be made, they can also be unmade. But the regime’s authoritarian approach has prevented the emergence of potentially more complex identities from below that could form the basis for more inclusive forms of citizenship, as noted by Helen Hintjens.

Like history, unity in Rwanda is part of a “rehearsed consensus”, as Bert Ingelaere writes.  Indeed,  the  government’s  policy  produces   the appearance rather than the reality of national unity and reconciliation.

Ordinary Rwandans “confront it in ways that seek to restore their personal dignity while subtly attempting to live their own truth”, and the rural poor “must perform the prescribed rituals of national unity and reconciliation, regardless of their private realities”, writes Susan Thomson, a Canadian academic. Ordinary Rwandans’ understandings and expectations contrast with the official government discourse on reconciliation, the “RPF Healing Truth”, as Eugenia Zorbas puts it.

Despite the regime’s attempts to suppress public references to it, “ethnicity was omnipresent” in Rwanda, McLean Hilker noted in 2011. She saw “a constant—and almost existential—need to know the ethnic identity of significant others”, adding that though “ethnicity has officially been banned from public life, it has become an unobservable variable in most (empirical) studies of post-genocide Rwanda”. Ingelaere suggests that ethnic group identity in Rwanda is arguably more meaningful than before the genocide, and that Hutu/Tutsi distinctions are more rigid than ever.

Hutus interviewed by Anuradha Chakravarty expressed feelings of sympathy, regret and shame for the genocide against ordinary Tutsis, but they were also suspicious of elite Tutsis. In general, they felt that they were victims of a new period of injustice under elite Tutsi rule. Clearly, attempts to “de-ethnicise” Rwandan society aren’t working, and the result has been to emphasise rather than de-emphasise ethnicity.

This was reinforced by frustrations about a “Tutsisation” of public office that has been hidden under the guise of ethnic amnesia. By the mid-2000s around two-thirds of positions in the state apparatus at both the central and the local level were occupied by Tutsis, most of them members of the RPF. As Jean-Hervé Bradol and Anne Guibert put it, the stress on “the absence of ethnic identities has become a means of masking the monopoly by Tutsi … of political power”.

Probably the worst long-term consequence of the gacaca neo-traditional transitional justice process and the regime’s discourse surrounding it has been the collectivisation of Hutu guilt. Some 60 percent of Hutu males who were adult in 1994 have been found guilty by the gacaca courts. And, in June 2013, President Kagame “invited” all Hutus to ask for forgiveness for those who killed in their name.

In 2006, Thomson was sent to an ingando camp to be “re-educated” when the regime perceived her research as “against national unity and reconciliation” and “not the kind of research the government needed”.

Ingando, she writes in a participatory report, was “an alienating, oppressive, and sometimes humiliating experience” that “teaches these men, the majority of whom are ethnic Hutu, to remain silent and not question the RPF’s vision”. Graduates of these camps saw them as efforts to exercise social control over adult Hutu men: “instead of being re-educated, these graduates have merely learned new forms of ritualised dissimulation and strategic compliance”.

Legislation on “divisionism” and “genocide ideology” serves a dual purpose: it shields the RPF’s views on history, and on national unity and reconciliation, while enabling the regime to silence political dissent. These vaguely formulated laws conflate criminal defamation and other lesser offences, and even the legitimate expression of opinions, with genocide ideology. Apart from legislation, “shadow methods” such as harassment, disappearances and killings are used to foster self-censorship.

The problem with the RPF’s ideology is that it goes against the grain: many Rwandans do not share it, instead seeing it as a weapon of oppression. A wealth of field research has shown that there is a wide gap between the government’s official version of history and the versions told in private in Rwanda. This is a major challenge to the validity of the RPF’s ambitious reconciliation project. 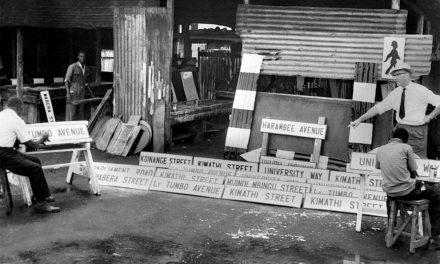